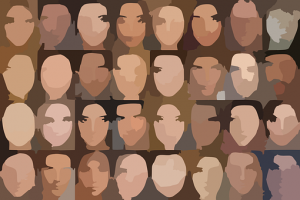 I have a friend, Matt. He is a lean and muscular build and has a BMI of 20.57, which puts him in the healthy weight box. He is 49 years old and very active. He walks, cycles and I have completed a seven-day mountain GR5 mountain hike with him. He also has a PhD in Nutrition. Not really the sort of person you would expect to be at risk of type 2 diabetes, but in 2016 Matt had an hba1c blood sugar reading of 43. This puts him in the ‘pre-diabetic’ and ‘at risk’ category.

A year later I met up with Matt and we talked about his blood sugars. He told me that his hba1c reading had dropped to 37. As it is under 42 then he is now in the ‘non-diabetic’ range again. I asked him how he had done this. ‘I’ve eaten fewer carbs’ he said. I also asked him what he thought of the ‘Eatwell’ guide. ‘Too many carbs’ he replied.

The ‘Eatwell guide’ is currently causing quite a bit of controversy. There have been debates centring around the government policy of recommending a substantial amount of carbohydrate in the daily diet. The Eatwell guide has also been questioned as causing the obesity crisis.

I think that this is possibly a slightly harsh critique. I’ve got a feeling portion size may be playing a part in the obesity crisis. There are some positive aspects to the ‘Eatwell guide.’ Its layout is simple and easy for people to understand. It includes all the food groups, which is more realistic for some people. The fact that it includes all the food groups can also encourage people to combine food groups. The biggest blood sugar spikes will occur when ‘sugar’ and ‘starch’ are eaten alone. If they are combined with protein, fibre and healthy fats, then the spikes can be reduced.

However, I agree with the critics who are concerned about the amount of starch in the diagram. It does not allow for flexibility amongst people’s lifestyles. If you are climbing mountains all day, then your body will perhaps be able to burn off the excess sugar. Most people’s current lifestyles are sedentary. They will go back to the office and sit down after eating their ‘spud and topping’ or ‘sandwich.’ A lower ratio of starch can help reduce blood sugar spikes.

As a type 1 diabetic, I have been eating low starch for years. It has helped me keep my blood sugars well controlled and in the non-diabetic range. Before I became diabetic at the age of 34, I used to take carb loading before half marathons pretty seriously. Probably as seriously as the running. After my diagnosis, I wondered how I would complete the 13.1 miles without my carbs. I decided to protein load instead. I finished the half marathon in my best time yet. Protein did the job just as well, perhaps even better. I am not convinced that even with active lifestyles people need large amounts of starch and sugar to get through the day.

I also run groups with pre-diabetics. The groups take a holistic approach to reducing blood sugar and encourages people to look at lifestyle, healthier choices, diet, mental health and activity to reduce blood sugar. It is an evidence-based programme which works. It uses the glycaemic index, portion size and the controversial ‘Eatwell guide’ as tools to encourage people to think about what they are eating and to make manageable healthier changes.

What was interesting about the groups was that many of the attendees start the group with a normal BMI. It is actually unusual to get a group with lots of obese people. The participants tend to eat what they think is a healthy diet and frequently exercise. They are highly motivated. It has caused me to question whether the focus on linking diabetes and obesity is helpful for everyone.

There is still no established understanding of what causes ‘type 1 diabetes.’ I have a feeling the answer could be multi-causational. Diet and lifestyle could put a stress on a system, which if weakened could trigger a genetic deposition of type 1 diabetes. No-one is sure at this point but ‘type 1 diabetes’ diagnosis in adults is dramatically increasing. I personally wouldn’t risk it.

I think it would be a shame to get rid of the ‘Eatwell guide’ entirely. It’s pretty clear, and people seem to find it helpful. Perhaps the ratios need to be reconsidered. I also think it would be great to include ‘herbs and spices’ on the diagram. They contain numerous health benefits. I hope however that this debate ends up a simple, easy to understand healthy consensus is reached.