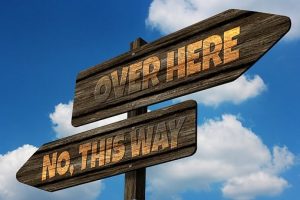 When training clinicians about IRIS (the General Practice domestic abuse service) they would sometimes tell me that they had made many referrals into the IRIS service that year. Occasionally this would happen at a practice from which I had received no referrals at all.

Intrigued by this discrepancy I would ask more questions. It transpired that the clinicians thought that they were referring into the service (IRIS) but in fact, what they were actually doing was signposting to the service. This ‘difference’ made all the difference, and the intended recipient was usually lost in the process.

A referral is a process whereby the referring clinician or practitioner contacts the service with which they want the patient to engage. The service will continue the process and contact the patient or client and try to establish a connection with them.

With signposting, a phone number is given to the client, and the onus is on the patient/client to make the call to the service themselves. There is an argument that suggests that this is a better way of approaching the situation as then the client contacts the agency when they are ready and motivated for the service.

From my personal work experience, people who are identified in clinical settings tend to be much more likely to be in a pre-contemplative mindset and less likely to pick up the phone. If they are in a potentially vulnerable client group, they could lack the confidence to make that first step. Once phone contact had been established via a referral route, the service explained, then engagement tended to be much higher.

Signposting is sometimes best practice. A patient may not want to have a referral made and may just want to take a number away with them. The domestic abuse sector may hand out phone numbers on lip-balms or barcode stickers to disguise them.

Within the drug and alcohol sector clients can often say they would like a service but then don’t take it up. The reasons for saying ‘yes’ to a referral but not wanting the service are not immediately clear. Perhaps if there are links with a methadone script, drug users are keen to look particularly compliant. In these cases, it may be better practice to use signposting as this can demonstrate motivation on behalf of the client, saves time spent on inappropriate referrals and prevents the support worker from becoming a ‘rescuer’.

Referral forms are a good way of letting practitioners know what sort of information is required to get someone into a service. These forms occasionally become unnecessarily long and can act as a barrier to someone accessing the service. The function of a referral process is to create a smoother and easier transition into the service. If this function gets lost at any point, for example, because the clinician hasn’t got time to fill out the form, the method of communicating the information isn’t the preferred one or the information asked for isn’t easy to access, then the purpose has been lost.

In some services, additional information can make the process easier, such as informing the service of safe times to make a call. Letting someone know that they are likely to receive a call from a blocked number in the next 72 hours. The system needs to allow for time for ‘life to get in the way’. Holidays, general chaos or busyness can stop someone picking up a phone for a while. Whatever processes are used, the key function of safe engagement into services needs to be kept as a priority.