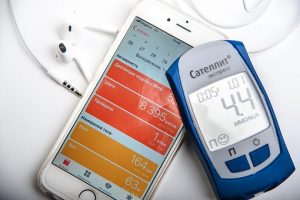 Technology is rapidly changing the world of some type 1 diabetics. The creation of Freestyle Libre (a small white patch which provides a continuous indication of blood sugar levels) has revolutionised diabetes care.

The most widely used indicator of blood sugar control is hba1c.  Hba1c is very useful but is also quite crude. It gives an average of the previous three months but does not show you how this average was achieved.

I’ve usually been a well-controlled diabetic but in 2018 personal circumstances changed, and my sugar levels began to spiral out of control, swinging from highs of 15 and above and crashing into hypos. My hba1c reading was a low reading of 6 percent. After losing consciousness, I was desperate to access more support. Accessing this was difficult. Because of a history of good hba1c readings, I was told not to worry. I tried to obtain a faster acting insulin (Fiasp) but could not provide the evidence needed to obtain it.

In 2019 Freesyle Libre became available on the NHS, and my specialist nurse prescribed it for me. Within weeks of wearing my white patch, I could see patterns and start to make appropriate self-managed adjustments. I also had data and could provide evidence to my clinicians to help me obtain more appropriate insulin regimes. Within seconds of my clinicians looking at my freestyle libre data, I was prescribed Fiasp. My sugars stabilised and I was achieving a low hba1c without the peaks and troughs.

There was another advantage to Freestyle Libre that I hadn’t envisaged. I went from being an invisible diabetic to a visible one. The little white patch instantly attracted conversations with other diabetics, and I began to access social support that was not possible before. A lady approached me in the local café and showed me her Miao Miao device. It linked with her apple watch and turned Freesyle Libre into a continuous monitoring alarm system, which may be particularly useful to those who live alone.

Anyone who is not able to access Freestyle Libre, can’t engage with it or can’t wear the monitor due to allergic reactions, could be at a disadvantage. Not only could they miss out on useful data, but they may not have the evidence to access other appropriate support. They will also be less visible. As diabetes can be an isolating condition, the white visible marker may be helpful to some patients.

These new technologies bring a fantastic array of possibilities for T1 diabetic patients, but it’s important that the people who can’t access or engage with these technologies do not get left behind creating wider gaps in T1 diabetes support.